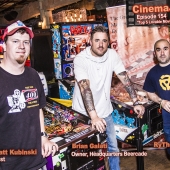 Update Required To play the media you will need to either update your browser to a recent version or update your Flash plugin.
By Matt Kubinski
Posted July 4, 2013
In CinemaJaw from Remote Locations!, episodes, Tour Stops
CinemaJaw 154, Best Lovable Villains w/guest Brian Galati2013-07-042016-04-25http://cinemajaw.com/wordpress/wp-content/uploads/2015/10/300x300.jpgCinemaJawhttps://cinemajaw.com/wordpress/wp-content/uploads/2013/07/Ep154-Photo.jpg200px200px
0
0

Last week, fresh off a Chicago Blackhawks Stanley Cup win, the CinemaJaw boys traveled to newly expanded Headquarters Beercade as part of their Summer Tour. There they were greeted by Owner and Capacity Bar Group partner Mr. Brian Galati who joined in on a discussion of video games, beer, lovable villains and of course… MOVIES! If you haven’t been to Headquarters Beercade yet, do yourselves a favor and go! This place is super awesome with classic arcade consoles and pinball machines lining the walls and exclusive craft beers on tap! Matt and Ry threw down on some some Street Fighter II, and then sat down to record this episode.

Hold onto your quarters, because this game is set to freeplay. Enjoy!

Reviewed this episode: World War Z, Dylan Dog Dead of Night
CinemaWAR: Is Johnny Depp a good actor, or just some guy in make-up?
I for an I: The Lone Ranger, Despicable Me 2
Trivia: Mask Movie Trivia 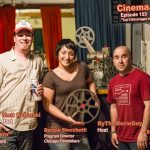 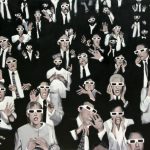