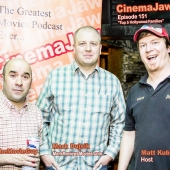 Update Required To play the media you will need to either update your browser to a recent version or update your Flash plugin.
By Matt Kubinski
Posted May 30, 2013
In CinemaJaw Firsts, episodes, New Segments
CinemaJaw 151, Hollywood Families w/guest Mark Dujsik2013-05-302016-06-30http://cinemajaw.com/wordpress/wp-content/uploads/2015/10/300x300.jpgCinemaJawhttps://cinemajaw.com/wordpress/wp-content/uploads/2013/05/Ep151-photo.jpg200px200px
0
0

Never go against the family! Blood is thicker than water, and home is where the heart is. In Hollywood home is where the movie making industry is, and many a power family seems to have blood type 35mm. It’s in the genes. It’s tough to throw a rock in that town without hitting a fraternal team of filmmakers, or a pair of sisters sending out headshots. Many of these familial  filmies are some of the most well known people in Hollywood, and this week on CinemaJaw we pick out our favorite of the bunch.

Our guest this week quickly becomes like family to us as he joins our discussion and lends his picks to the list. You may know Mr. Mark Dujsik from his minimalistically designed, literally titled, and well written blog Mark Reviews Movies. Mark is a member of both the Chicago Film Critics Association and the Online Film Critics Society. He has been reviewing film for a long time. He is also a member of a family. So he is pretty much the perfect person for this task! In addition to a saunter up some family trees we also plumb the depths of Hollywood as always. Going “I for an I” (Interested or Ignore), bashing each other in a CinemaWAR, and playing a rousing game of Movie Trivia. We also have a NEW SEGMENT, that I will leave as a surprise! This Jaw is more loaded than your drunk Uncle Scott. So remember that film is in your DNA and take a listen!

Reviewed this episode: Star Trek Into Darkness, The Intouchables
CinemaWAR: Who has the brighter future Jaden Smith or M. Night Shaymalan?
I for an I: After Earth
Trivia: Directional Movie Trivia 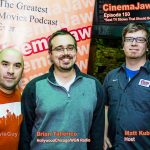 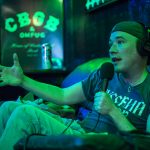