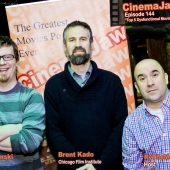 Update Required To play the media you will need to either update your browser to a recent version or update your Flash plugin.
By Matt Kubinski
Posted April 5, 2013
In episodes, Special Guests
CinemaJaw 144, Dysfunctional Film Families w/guest Brent Kado2013-04-052016-06-30http://cinemajaw.com/wordpress/wp-content/uploads/2015/10/300x300.jpgCinemaJawhttps://cinemajaw.com/wordpress/wp-content/uploads/2013/04/Ep144-Photo.jpg200px200px
0
0

Function is the key. Here on the Jaw Matt and Ry tend to argue. Throw in Eliaz who randomly chooses a side and our little family is not what you would exactly call nuclear. As it turns out, most families in film are a touch of what is commonly known as dysfunctional. We don’t need to get all clinical here, we all know what dysfunction is and every movie family defines it. After all, were they not, it would make for some pretty boring movies. This week on CinemaJaw we take a look at our favorite dysfunctional movie families, comical, horrific and everything in between.

We need a councilor to help us on this therapy session. Enter Brent Kado. Brent is a man of many talents and ambitions  He is currently on the board of the Chicago Comedy Film Festival, as well as beginning a new film school: The Chicago Film Institute. Somehow he also finds time to make feature films. Brent is someone to pay attention to, and a perfect guest! Brent Kado and Matt and Ry

In addition to the above, we also have some great segments like I for an I, CinemaWAR, Trivia and a whole lot more. So let CinemaJaw join the family in your head and give your eardrums a complex.

Reviewed this episode: Stoker, The Croods, Liberal Arts, Bully
I for an I: Trance
Trivia: Movies That Take Place in The Woods

This episode of CinemaJaw is dedicated to the memory of Roger Ebert. He will never be equaled. 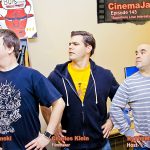 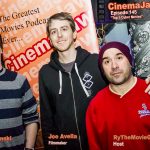