Johnny Depp steps in the the shoes of violent criminal and FBI informant Whitey Bulger. To pull this character off Depp goes undercover in some major make-up something he is very use to. The make-up is a bit distracting at first as it kept grabbing my attention early on, but after the story starts to roll I forgot I was looking at Johnny Depp and fully bought it. Joel Edgerton’s performance is the other standout, with this and The gift which came out a few weeks ago he is having one hell of a year. The rest of the cast is great as well – Adam Scott, Kevin Back and Benedict Cumberbatch all help give this film a tense and gripping feel. I really enjoyed Black Mass……and stay for the credits as they show real pictures of all the players involved. 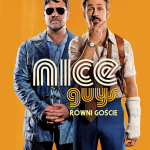