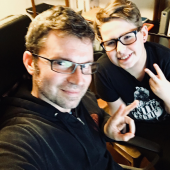 Update Required To play the media you will need to either update your browser to a recent version or update your Flash plugin.
By Matt Kubinski
Posted January 22, 2018
In episodes, Guests Via Skype, Multiple Guests
CinemaJaw 357, Justin Zimmerman & Kian Doughty – Kid Adventures2018-01-222018-01-22http://cinemajaw.com/wordpress/wp-content/uploads/2015/10/300x300.jpgCinemaJawhttps://cinemajaw.com/wordpress/wp-content/uploads/2018/01/Justin-Zimmerman-and-Kian-Doughty-on-CinemaJaw.png200px200px
16
0

Reviewed this episode: I, Tonya
(I for an I) Interested or Ignore: Maze Runner The Death Cure
Trivia: Run Movie Trivia
CinemaWAR: Which annoying movie neighbor would you rather be stuck with – Louis Tully from Ghostbusters or Sid from Toy Story?
Sponsored by: Second City Training Center

Backpacks stuffed with homemade gadgets, magic wands, and peanut butter and jelly sandwiches. These are the things you take with you on Kid Adventures. Perhaps it’s the wonder of a youthful point of view that can make these explorations seem so epic and important. One thing is for sure this is a wide film genre with plenty of entries. Matt and Ry don their slick-shoes and pinchers of power and go down into the tunnels to unearth the hidden treasures within. Joining Team ‘Jaw are a pair of dudes, an actor and director team (one of whom is the youngest CinemaJaw guest to date), Justin Zimmerman & Kian Doughty. The simplest of elevator pitches is this: Filmmaker and comic book creator Justin Zimmerman teams up with his twelve-year-old neighbor Kian Doughty and creature effects genius Chris Walas (Gremlins, The Fly) to create a 5-minute horror film set in their basements and garages. Trust me, anything Zimmerman is involved in is something you should be interested in. Currently, the team is running a Kickstarter campaign to raise money for post-production.

So follow the map and bring your luck dragon! It’s time for an adventure in podcasting! 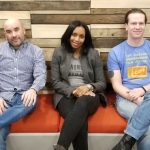