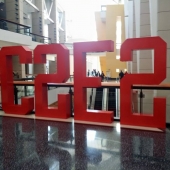 Update Required To play the media you will need to either update your browser to a recent version or update your Flash plugin.
By Matt Kubinski
Posted May 1, 2015
In CinemaJaw from Remote Locations!, CinemaJaw LIVE!, episodes, Multiple Guests, Special Guests, Specials
CinemaJaw 236, C2E2 Special! w/guest Gabriel Hardman, Geeks Out, and MORE!2015-05-012015-11-02http://cinemajaw.com/wordpress/wp-content/uploads/2015/10/300x300.jpgCinemaJawhttps://cinemajaw.com/wordpress/wp-content/uploads/2015/05/c2e2.jpg200px200px
1
0

The Chicago Comic & Entertainment Expo – also known as C2E2 – is a convention spanning the latest and greatest from the worlds of comics, movies, television, toys, anime, manga and video games. Bringing the best of popular culture to Downtown Chicago, C2E2’s show floor is packed with hundreds of exhibitors (like CinemaJaw), panels and autograph sessions giving fans a chance to interact with their favorite creators and screening rooms featuring sneak peeks at films and television shows months before they hit either the big or small screen! This year marked C2E2’s sixth year and CinemaJaw was on hand to record the madness, promote the show and score some interviews. And Score some we did. We are joined this week by artist Gabriel Hardman who has done the storyboards for some films you may have heard of, as well as some amazing graphic novel and comic book work. Also stopping is Kevin Gilligan to discuss a very important non-profit called Geeks OUT. Central to the Geeks OUT mission is the free and un-cynical enjoyment of geek culture. Celebrating and promoting the LGBT fans within geek culture strengthens and enriches that culture for all. It’s a great cause! Last but not least… we are joined by a representative for the new horror film Insidious 3: Into the Further. There’s a cool trailer set up for it called the Into the Further 4D Experience. Featuring much-praised Oculus Rift VR technology. It’s a unique ride that’s certain to scare the heck out of you. We had an absolute BLAST at C2E2 this year, and we just can’t wait to do it again in 2016. It was so great to see some of our fans from around the country show up and say hi! We love seeing you all. Come and have some fun with us, and listen along. 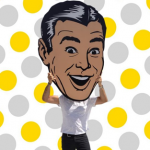 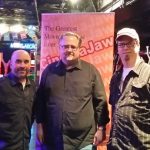