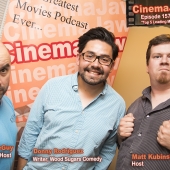 Update Required To play the media you will need to either update your browser to a recent version or update your Flash plugin.
By Matt Kubinski
Posted August 2, 2013
In episodes, Tour Stops
CinemaJaw 157, Best Leading Men Today w/guest Donny Rodriguez2013-08-022016-03-14http://cinemajaw.com/wordpress/wp-content/uploads/2015/10/300x300.jpgCinemaJawhttps://cinemajaw.com/wordpress/wp-content/uploads/2013/08/Ep157-Photo.jpg200px200px
0
0 Our Summer chicago Tour continues this week on CinemaJaw as we stop in to Wood Sugars Studio to take a look at a topic that has been a long time coming for us, our Best Leading Men working Today. Though (thankfully) it’s long since over, there was once a time when men played even the female roles and only actors, not actresses, were allowed on stage. Obviously men play a vital role in pictures, and a good leading man can make or break a film. Over the years there have been so many titans of the cinema… too many to recount. That is why we are only making our lists on actors who are still… well…  ACTIVE today. We need a thespian to help us. A master of stage and cinema. A carnival barker worthy to control freaks and outcasts such as us. Enter Mr. Donny Rodriguez. Marking his third appearance on the ‘Jaw, Donny is uses his massive acting, writing and comedy skills to whittle down the stick and form it into a sharp weapon, spearing timeless careers in the making, and thrilling us to no end! He also has some writing projects and a new Wood Sugars Live Show to promote (click their flyer to more info below).

In addition to our Favorite Actors we hit all the usual high points. I for an I, CinemaWAR, and let’s see if Matt K can continue his Trivia win streak.  ACTING!

CinemaWAR: Batman will be in the next Superman film, lame or cool?
I for an I: Two Guns
Trivia: Gun movie Trivia
Reviewed this episode: Turbo, The Conjuring, Sinister 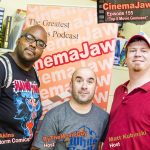 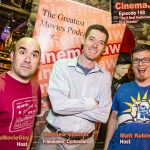