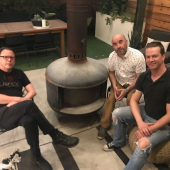 Update Required To play the media you will need to either update your browser to a recent version or update your Flash plugin.
By Matt Kubinski
Posted July 16, 2018
In episodes, Special Guests
CinemaJaw 381, Bryan Wendorf – Camping Movies2018-07-162018-07-16http://cinemajaw.com/wordpress/wp-content/uploads/2015/10/300x300.jpgCinemaJawhttps://cinemajaw.com/wordpress/wp-content/uploads/2018/07/bryan-wendorf-cuff-cinemajaw-2.png200px200px
0
0

Reviewed this episode: Leave No Trace, Sicario: Day of the Soldado
I for an I (Interested or Ignore):  The Equalizer 2
Sponsored by: Overcast

Camping speaks to our souls. It harkens back to a primal gathering, around a fire for warmth and protection from the beasties out there in the night. Camping is a communication with nature, where the only tweets one hears are from actual birds, and the only technology you might bring along is a guitar. Of course, telling stories around the fire is a huge part of the grand traditions of camping. Scary, funny, dramatic… you name it. Many of those stories have become films. This week on CinemaJaw we set up our tent, tie the food up in the trees, and gather ’round the firepit as we take a look at our Top 5 Camping Movies. Joining us is a returning guest who likes camping, but likes underground film even more! Bryan Wendorf co-founded the Chicago Underground Film Festival in 1994 and remains its Programmer and Artistic Director. He has served on the board of directors of IFP Chicago and has curated film programs at numerous venues including Conversations At The Edge at the Gene Siskel Film Center (Chicago), Transmediale (Berlin) and the Revelation Film Festival (Perth). He’s served on juries at the Slamdance, Chicago International Movies and Music, Big Shoulders, Onion City and Lake County Film Festivals. He studied fine art at Columbia College Chicago and has written articles about film, music, comics and popular culture for a variety of publications including New City Chicago, Indiewire, It’s Only A Move!, and Wormwood Chronicles. Oh, and WOW can he roast one heck of a s’more!

So zip up your sleeping bags and cuddle up with someone you love… it’s ok that you brought your earbuds… you have a CinemaJaw to listen to! 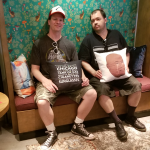 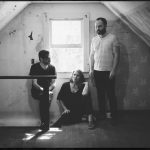