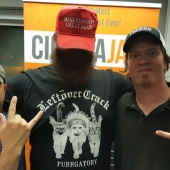 Update Required To play the media you will need to either update your browser to a recent version or update your Flash plugin.
By Matt Kubinski
Posted September 12, 2016
In CinemaJaw Firsts, episodes, Special Guests
CinemaJaw 294, Riot Fest – Punk Rock Movies2016-09-122016-09-12http://cinemajaw.com/wordpress/wp-content/uploads/2015/10/300x300.jpgCinemaJawhttps://cinemajaw.com/wordpress/wp-content/uploads/2016/09/Riot-Fest-CinemaJaw.jpg200px200px
0
0

For those of you who may not know, Chicago is the home/birthplace of many a music festival. It seems like you can’t throw a stone in the summer without hitting some outdoor gathering of screaming fans of some band or another. There are some fests however, that happen deep into the risky End-of-Summer/Fall season, that may or may not suck. Riot Fest is a multi-day music festival specializing in punk, rock, alternative, metal, and hip-hop that is happening THIS WEEKEND in beautiful Douglas Park Chicago. There are tickets left to this historic show! Founded in 2005 in Chicago, it has now expanded to include stops in Denver and Toronto. Carnival Rides, amazing food vendors, sideshow performers, and more add to the atmosphere of this independent music fest. We happen to love it! This year Riot Fest is especially noteworthy in that it will feature a headlining performance by the reunited Original Misfits, 33 years in the making.

So naturally we are covering our Top 5 Punk Rock Movies. Joining us is our first ever incognito guest. Riot Fest Twitter Guy is the voice of the festival. Using his magical powers to teleport from stage to stage to get all the best behind the scenes coverage from the festival… or maybe he just walks… briskly. RFTG (as we have taken to calling him for short) is in disguise to keep his already vibrant social media persona separate from that of the festival, or perhaps he is just ashamed of himself… maybe both.

In any event, crack open your favorite beverage, and be sure to smash the bottle when you are done, listen to this – 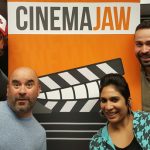