A Review by Ry The Movie Guy - Rebuttal by Matt K.

Three years ago, everyone here at Cinemajaw was blown away by a film called Ex Machina, written and directed by Alex Garland; For his second directing feature, he directs a bestselling novel, Annihilation, and casts Natalie Portman as his lead. Matt and I walked into the shimmer to make sure this was no sophomore jinx.

Annihilation’s plot, or the setup at least, is done rather quickly; In the early moments of the film we see a meteor shoot across the Earth, finally striking a lighthouse on the coast, and a strange type of shimmer pops up around the lighthouse and starts to grow. We then meet Natalie Portman’s character, a biologist whos being questioned (presumably in the future) about surviving her time in the Shimmer, now known as Area X.

It turns out her husband, played by Oscar Isaac, is a special forces soldier in the military. He was sent on a mission and had not been heard from since. That special mission: a trip inside Area X. When he mysteriously comes home and is sick, he and Portman are detained. Eventually, Portman and four other women are tasked with heading inside the Shimmer to find answers.

No radio or communications works once inside. It is here the wonder of Annihilation begins. Everything inside the area is just a little off or different. There are some solid jump scares as the women are attacked by animals during their journey, however, the mystery of what happening inside the area and to the women themselves is the true joy of watching this film.

The movie as a whole, including Area X, are just a little different than what we’re used to seeing at the cineplex. The script is deliberately slow-paced to start, and it revs up for a big climactic ending. Director Alex Garland wants you to think about what’s going on. He wants you engaged as a viewer, and I was. The cast, led by Natalie Portman, are above average, with the highlights actually being Jennifer Jason Leigh and Gina Rodriguez.

The first two thirds of this movie could be categorized as a slow burn, but the last 35 minutes or so were tense and at the same time beautiful and filled with wonderment than I have seen in a motion picture in years. I take notes during these screening with a pen and paper and I almost snapped a pen between my fingers during the finale.

It may not be a movie for the masses, but I loved this damn thing.

I think the ending is where the movie shines. I mention how it’s a little slow at the beginning and it starts to build up a little bit, but I think at that point when Natalie Portman goes into the rabbit hole, and this trip starts to begin that’s so wild, and I felt as good at it gets for me.

The sound design, especially in this last thirty minutes is spectacular.

A nice touch that I saw was that Garland used the word “refracting”. He uses a couple of images early on where an image is refracted in water, like when Natalie Portman and Oscar Isaac’s hands are touching through a glass of water. Later, Isaac is hospitalized and he has a protective bubble around him. Portman peers through at him and through the plastic you see a refracted image, and it’s a nice touch because that’s what the whole movie is about.

There’s a theme of self-destruction, not only as individuals but also as a race. That comes up when Portman discusses how our genes are flawed and self-destructive because we’re aging. Once we follow the characters into Area X, we see this exemplified there. There’s a scene where there’s something moving in someone’s body and you see it moving. This movie was also gory to the point where I almost had to look down.

Bear scene. Very few movies rival The Revenant, and this does. It’s very intense and horrific.
The final 30 minutes were some of the best scenes of 2018.

About 4 or 5 times, there were interrogation scenes with scientists and Natalie Portman. Because of the people cast one of whom was a comedian, you didn’t know if it was serious because it comes off as corny.

What Did I Learn?

When people who don’t know how to react to something is a little bit different, they end up laughing. You’ve got a director going for something different, a unique moment, and it has some weird effects, and people are laughing because it looks a little goofy.

Smart, tense, beautiful, and the last 30 mins will Annihilate your senses.

First of all, I want to agree with you on the cast, all above average. More so with Natalie, Oscar, and Jennifer Jason Leigh – holy crap, Jennifer. Jason. Leigh. We need to see more from her.

This movie is a bad acid trip.

I said to Ry, “You take the acid about 1 minute before that finale, I think it could kill a person if they were in that state.”

You take it as soon as they go into the Shimmer, and get ready for the worst acid trip of your life. It’s not like watching The Wall, which is kinda dark and you could take it, this one will mess you up. I can’t imagine watching this in an altered state.

The effects, I agree, wonderful and beautiful to look at, but there’s some rough edges on the effects. It felt very CG to me and took me out in certain moments. They were going for that fractal thing and there was an undertone of drug culture, which was very interesting.

I don’t want to give anything away, not knowing what you’re about to experience is part of the joy of seeing this movie, but I’ll just say this: there’s a special effect with another character in this scene, I found the other character to be a little comedic and laughable, and in a scene that was supposed to be very serious and frightening, it kind of made me laugh. There’s some great music with an almost baroque Bwong to it. But there’s this one particular shot of a character that starts to bend over during one of those notes, and I swear to god it founded like a fart and it took me out of it. I don’t think I was alone because there were people laughing in the screening.

Although I didn’t like the climax, I enjoyed the resolution. There’s a twist, obviously; This is a movie that I think M. Night Shyamalan would be sitting in the back going, “Dammit, why didn’t I think of that?”

There were some moments of gore, I enjoyed it, I thought it was good.

There were some themes of cancer; She’s a cancer biologist, and at one point she looks inside the Shimmer and compares it to a tumor, that the Shimmer is growing like a cancer.

But overall I don’t think I liked it. I’m a sucker for good Sci-Fi Horror Adventure, and I was kind of along for the ride for the most part, but the ending fell apart for me. At the end of the day it didn’t connect all of the dots. I just don’t they had the budget for some of the effects. All the digital animals looked bad. I’m not a big fan of how they made the Shimmer.

The bear attack scene, where several of the women are restrained. It was tense, it was awesome

“The Annihilation”, when Natalie Portman and Jennifer Jason Leigh are reunited during the climax. Also, title cards, not sure why those were there.

When you watch Wizard of Oz synced up with Dark Side of the Moon.

What Did I Learn?

Natalie Portman can be a badass, this is the first time she really gets into a action role.

Smart, tense, beautiful, and the last 30 mins will Annihilate your senses. 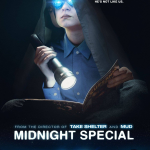