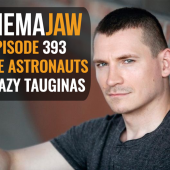 Update Required To play the media you will need to either update your browser to a recent version or update your Flash plugin.
By Matt Kubinski
Posted October 8, 2018
In episodes, Guests Via Skype, Special Guests
CinemaJaw 393, Kazy Tauginas – Best Movie Astronauts2018-10-082018-10-08http://cinemajaw.com/wordpress/wp-content/uploads/2015/10/300x300.jpgCinemaJawhttps://cinemajaw.com/wordpress/wp-content/uploads/2018/10/kazy-tauginas-cinemajaw.png200px200px
0
0

Space… The Final Frontier… and all that jazz. As human people, we all value the explorers, those who boldly go. No set of explorers in history have been braver, and arguably more important, than the Astronaut. These women and men strap themselves to dangerous rockets and blast off into the sky. Though our first steps into outer space came decades ago, it is nonetheless fascinating, and a great source for many many stories. This week on CinemaJaw we take our protein pills and put our helmets on as we cover our top 5 Movie Astronauts. After writing several short films (and starring in over 20 of them), Tauginas drew inspiration from his mother who’d been diagnosed with Lupus, and his own boxing experience, and decided to write “Standing Eight,” a short about a boxer who is forced to retire and contend with life outside of the ring after being diagnosed with systemic lupus. During the spring of 2015 he oversaw two successful Kickstarter campaigns to fully fund the film. Since its completion, “Standing Eight” has won eleven festival awards including Trinity International Film Festival’s Best Short Film. He hopes to release the film later this year on Amazon, with proceeds going to Lupus charities.

Wow! A career headed into the Stratosphere! So happy to have Kazy on the show.

So buckle in, earbuds on, check oxygen levels, and get ready for one helluva ride on this weeks CinemaJaw!

Trivia: Ryan Gossling Movie Trivia
I for an I: Bad Times at The El Royale 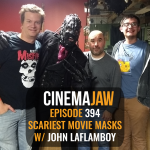