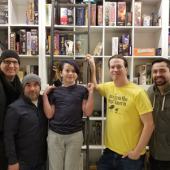 Update Required To play the media you will need to either update your browser to a recent version or update your Flash plugin.
By Matt Kubinski
Posted January 8, 2018
In CinemaJaw Firsts, episodes, Multiple Guests, Specials
CinemaJaw 355, Frank T. Ziede – Best Performances of 20172018-01-082018-01-07http://cinemajaw.com/wordpress/wp-content/uploads/2015/10/300x300.jpgCinemaJawhttps://cinemajaw.com/wordpress/wp-content/uploads/2018/01/Frank-T-Ziede-Parker-Kubinski-CinemaJaw.png200px200px
13
0

Reviewed this episode: Phantom Thread, The Machinist
(I for an I) Interested or Ignore:  The Commuter
Trivia: 2017 Action Movie Trivia
CinemaWAR:  Can Liam Neeson get back to serious roles, or is he typecast at this point?
Sponsored by: Second City Training Center

With one week of January firmly behind us, CinemaJaw says “Welcome” to 2018 and good riddance to 2017! This week we continue our year-end wrap up with a look at the best performances last year. Joining us is returning guest, and friend of the show, Frank T. Ziede. Frank is the founder of Power Forward Films, a film production company based in Chicago. He and his team have worked on over a dozen different short film projects and most recently launched BLACK (www.blackthewebseries.com), a high action web series which features real-life military veterans which can currently be seen on Amazon Prime. On BLACK, he recently partnered with the team from Legion of Creatives, an Emmy winning production company that recently produced the RED MACHETE series for AMC’s THE WALKING DEAD”. So Frank is a great person to know in the film scene.

Also, as a special bonus guest, Matt K’s son Parker makes his first official appearance on CinemaJaw to help us out on Trivia. 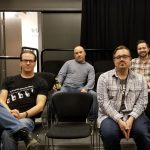