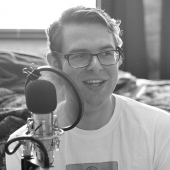 Update Required To play the media you will need to either update your browser to a recent version or update your Flash plugin.
By Matt Kubinski
Posted January 30, 2014
In episodes, Special Guests
CinemaJaw 178, Best Movie Geeks w/guest James D’Amato2014-01-302016-01-05http://cinemajaw.com/wordpress/wp-content/uploads/2015/10/300x300.jpgCinemaJawhttps://cinemajaw.com/wordpress/wp-content/uploads/2015/11/JamesDamato.png200px200px
0
0

Reviewed this episode: The Act of Killing, Drinking Buddies
I for an I: The Awkward Moment
Trivia: Successful Child Actor Movie Trivia
CinemaWAR: What is the biggest Oscar snub, Before Midnight or Inside Llewyn Davis? Nerds, dweebs, dorks, freaks, neo-maxi-zoom-dweebies and especially geeks… Listen up, because this podcast is about you! Well, the “you” that has been portrayed on the big screen that is.

Something strange has happened this generation. What was once sure to get you a wedgie, or worse the dreaded swirly, is now… kind of cool. I know, I know, it freaks me out a bit too, but for some reason having a comic book collection and being able to name all the actors who have portrayed Dr. Who isn’t NEARLY as unpopular as it once was. The term “geek” is worn proudly, like a badge of honor these days as the sad, socially isolated weirdo stereotype is being replaced with a savvy, sexy (gasp), and confident reality. I can assure you that this was not the case when I was in high school, though I am not bitter. I am happy to have lived to see the geeks inherit the Earth! I may yet give them a congratulatory swirly!

We can postulate many reasons why this above fact may be true (the one about geeks being cool, not the one about swirlies). Perhaps the internet’s mass communication capabilities let the geeks know that there were so many others out there like them, whereas before they remained isolated. Maybe shows like Big Bang Theory and pop consumer electronics like smart phones and tablets have given rise to the geek as a well paid sex symbol. For the most part the geek is smart, successful, and affluent. The bullying and abuse has largely given way to respect, and plus, I think we geeks just plain outnumber the norms these days. Huzzah. And yes… We can still help you fix your computer.

But before we open a command prompt, we are discussing our Favorite Movie Geeks this week on CinemaJaw.

Our guest, returning by popular demand for his second appearance on the ‘Jaw (here is his first) is none other than role playing game podcaster, and improv comedian… James D’Amato. And since I just mentioned the words “role playing game” and “improv” in the same sentence as Jame’s name, and since he admits to once LARPing on this episode… I think it is fair to say that James is a proud geek. James is with us for the entire episode as we discuss our favorite Movie Geeks, and a whole lot more. So push those glasses up the rim of your greasy nose and straighten that bow-tie, we have some movie nerds to name, and some stereotypes to squash. (see what I did there?) 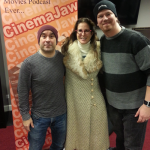 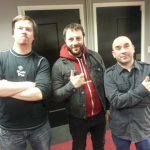